This is a free online magazine created by AF staff members - by fans for fans. No profit or monetary benefits have been gained from the creation of this magazine. Aarin has not been paid to display any of the advertisements seen in this magazine. All original artwork and photographs have been used with the permission of the artists. Aarin has no claim to any of the commercial graphics presented. These are copyright of the respective companies, to which Aarin is in no way affiliated. This magazine is meant for private use only. The magazine must not be reproduced anywhere or in any other format. The printed version of the magazine is for sale (since 3rd edition till latest) while the digital version is not for sale.

Where to buy printed version?

How to leave comments or contribute?

If you are interested to contribute an article for the next magazine, you can use the Contact Us link at the bottom of this page or the best is to private message "aarinfantasy" directly in the forum (aarinfantasy.com). We do not have any dateline set for the next one yet.

If you like what we are doing and interested to contribute by donating to AarinSecret, you can donate to us.
This is also a donation fund for AarinFantasy forum.
(NOTE: Please include your forum username at the message or note during the donation process)
Thank you so much!

Click the "Support Me on Ko-fi" button below for a single donation at Ko-fi.com:
NOTE: Forum points will be given based on the amount donated.

Click the "Subscribe" button below for monthly donation (a few options available):
NOTE: I will be giving some extra forum bonus or future perks for those who choose to donate monthly.

You can choose to stop or unsubscribe your monthly donation anytime by clicking on this button:

"There was a single person who has been a huge part of making the magazine a few years ago, this person was my main personal reason why I stopped creating it last year because I was sad to be reminded of things... somehow, this person is now gone from my life just recently. So I told myself that I need to move on and with a lot of positive feedbacks and love, I will consider to bring back the magazine this year or beginning of next year if I am able to get more interesting ideas, sources and people." - Aarin

"Hey everyone! This will be the last AarinSecret magazine that I'm going to do. There are too many personal reasons behind it but if given the chance again, I would want to do it again because I really enjoyed the entire process of making the magazine especially when it comes to interviewing and understanding people, plus my freedom to design what I like. But for now, I think I won't be able to do it anymore. So thank you so much all these years for your support and everything. I will keep this site and my main site going, together with my other social media sites. Let's see what the future holds. Do keep the yaoi love alive!! ^__^ " - Aarin

"Took me a while to release AarinSecret 6th edition (digital version) due to some hiccups at server and clashing with my country's holidays where I have to go off on a short vacation, but at least it's finally here. About half a year ago, I've open my own online store which sells BL artists stuff, official BL items and even the printed copy of AarinSecret. So if you like to pick up a printed version of the magazine, you can go to "AarinFantasy's BL Yaoi Shop" to buy it and it comes with some freebies so be sure to check what it is from the shop. If possible, I hope to make another edition again but each year there's always a possibility that I can't go on, so we'll have to see about it. Currently, I want to do more for yaoi fans besides just the magazine or the forum... I hope I can start on it? Yes, I know I said that a few times before but I want to keep on telling myself this so I can try doing things some day. Thank you for always supporting me and my site. Happy reading and hope there will be next round!" - Aarin

"Releasing AarinSecret 5th edition (digital version) today! Previously in December 2015, we've released and sold the printed copies at an event called Comic Fiesta 2015. After that, the printed copies were open for sale worldwide (USD20 including packaging, handling and shipping) and all physical copies come with a Love Stage postcard by SuBLime manga. If you're still interested to buy the physical copy, do email Aarin at staff@aarinfantasy.com to check if it's still available, as there are limited copies left. No more reprints. And if you're still wondering about the digital version or new to AarinSecret, it's free for download. We don't get to keep monetary profit out of the physical copy sales because it all goes to the transportation costs, booth setup costs and things that are related to the magazine. But it will be great and helpful if you can or wish to contribute some money for this cause especially for the next edition, just use the DONATE button at this page. Thanks for reading and hopefully me and my team will bring more things to you in the next edition!" - Aarin

"We are back again with AarinSecret 4th edition! For this edition, AarinSecret is featuring some new artworks by various artists, interviews, events coverage, reviews and lots more. Thanks again for downloading!" - Aarin

"AarinSecret is a BL online magazine side project that I started with Dai-kun back in 2006. As it is a shared passion of ours, we don't get paid to create this magazine. But due to unforeseen circumstances and setbacks in our lives, we couldn’t produce a consistent release of the magazine as intended and thus there were no releases from 2008-2012. It takes a lot of time and effort to put things together into creating one issue. In fact, I almost gave up on the project until early 2013, when a special someone encouraged, guided, gave me ideas, and even got involved in making the 3rd edition. So in May 2013, we released the 3rd edition online and even printed 50 limited edition copies, which were given out as contest prizes and to some people who donated to the site. There are still mistakes here and there in each edition as we are constantly learning as we go along, so we hope to improve more on that as well as on other aspects. Thank you for your kind understanding and support!" - Aarin 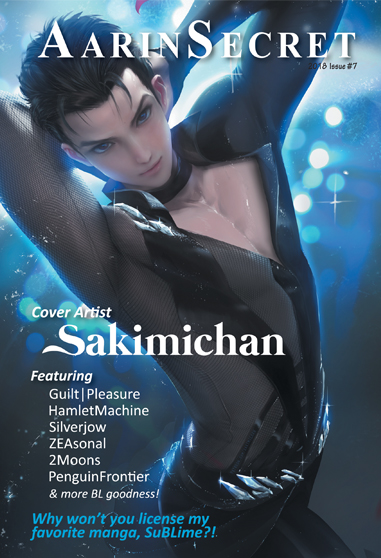 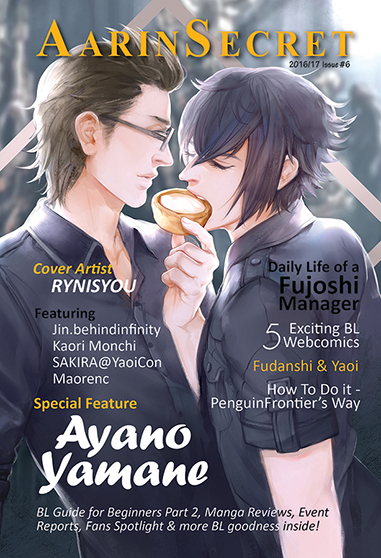 This issue features:
Featuring cover (Final Fantasy XV fanart) artist, RYNISYOU.
We are honoured to be able to interview Ayano Yamane in person. There are also interview featuring cosplayer Jin.behindinfinity and BL artist, Sakira. Some interesting articles from male BL fans (fudanshi) and ex-brand manager of June. The continuation of the short BL Guide for beginners is available inside, info on Kaori Monchi (of Hey! Class President fame), manga reviews, spotlights by some of our fans, events coverage and more! 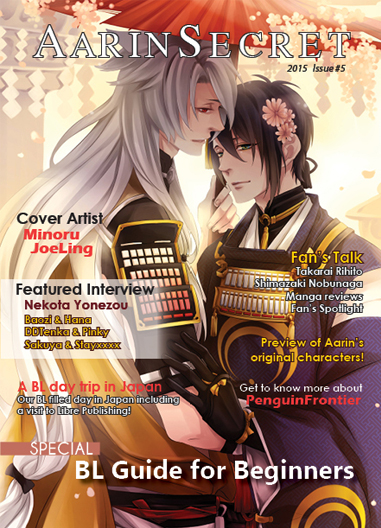 This issue features:
Featuring cover (Touken Ranbu fanart) artist, Minoru JoeLing. We are honored to be able to interview Nekota Yonezou in person and visit Libre Publishing office in Japan with exclusive invitation. There are also exclusive interviews with cosplayers: Baozi & Hana, DDTenka, Pinky Luxun, Sakuya, Stayxxxx, about their take on BL. If you miss out the panel talk of PenguinFrontier in an event last year, you can find the full transcript of the talk in this edition.
A short BL Guide for beginners is available inside, as well as fan's talk and info about Takarai Rihito (of Ten Count fame), Shimazaki Nobunaga (seiyuu of Haru from Free!), manga reviews and even fan's spotlight.
Some event coverage reports and more exclusive photographs by our very own media photographer!
We wrapped it up with our adventure on "A BL Day trip in Japan", with Aarin and her team. 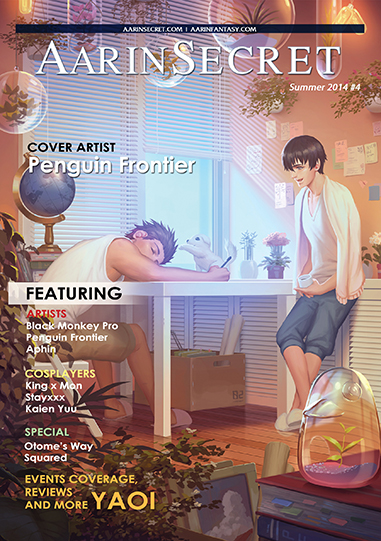 This issue features:
For this edition, AarinSecret will be featuring a double cover, both front and back, starting with Penguin Frontier and ending with an awesome artwork by Black Monkey Pro. I am pleased to announce two artwork debuts by Penguin Frontier (for the cover) and Aphin (for a tutorial). These artworks are new and have not been shown anywhere before this, as well as many never been seen before photographs of events and cosplayers that we have kept and waiting to show everyone.
There are also exclusive interviews with various people like the director of Squared and also famous cosplayers such as KingxMon and Stayxxx. Also, a special cosplay tutorial by Kaien Yuu. Otome's Way also mentions about their products.
Some reviews of manga are featured too and more...
Oh yes, do take note that there is nothing overly explicit in the magazine and the covers are work safe. And if you're curious about me, I have written an AarinFantasy FAQ inside too. 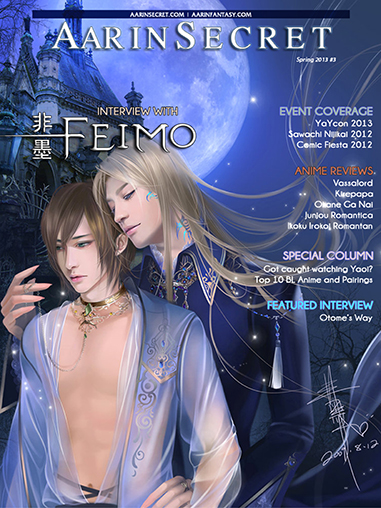 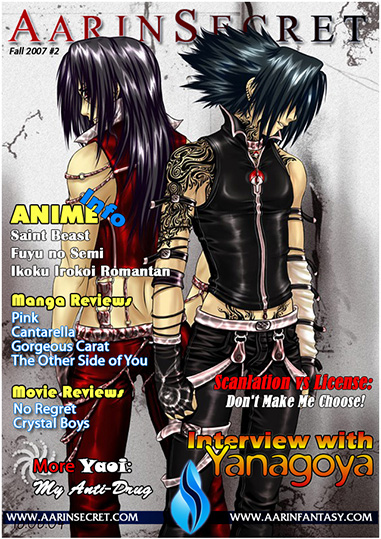 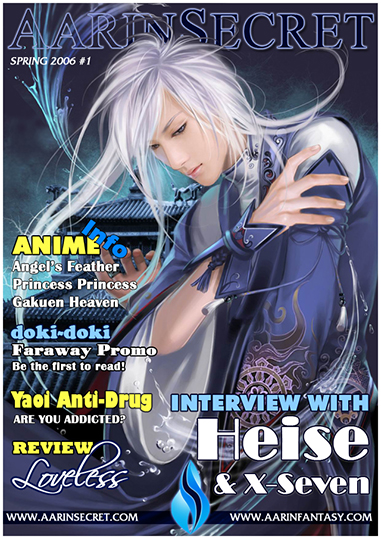 This email address is being protected from spambots. You need JavaScript enabled to view it.